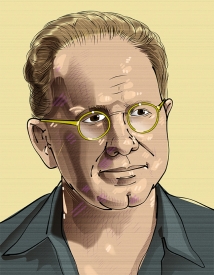 Biber has never known a time when he was not making something. His earliest memories effervesce with watercolors of Spiderman, toys made from wire, and sculptures welded from car parts. A mechanic’s son, Biber found a creative outlet repairing rusted cars from Detroit’s glory years. The creative passion resulted in a BFA with Honors in Illustration from Carnegie Mellon.

Since graduation, Biber has enjoyed a career as an Illustrator and Graphic Designer. Throughout his career, Biber has won several communications awards. Active in the Pittsburgh region, Biber served as Vice President of PSI and in 2011, and he won a Jefferson Award for his work with Pittsburgh Trails Advocacy Group (PTAG).