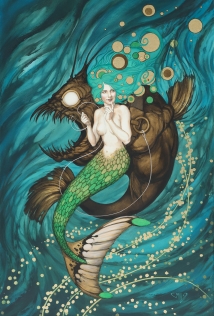 Rhonda Libbey is a western PA native, best known for her work in the science fiction and fantasy genres in both games and literature. Her work has been published in numerous properties, including Call of Cthulhu, Legend of the Five Rings, Red Dragon Inn, A Game of Thrones, Starship Troopers, and Middle Earth Quest.

Rhonda has written and directed a few award-winning film shorts. In 2012 she worked as Art Director on the full-length motion picture Scream Park (Dir. Cary Hill, ProtoMedia), creating the storyboards, posters, postcards, and DVD case as well as assisting in wardrobe and makeup design. Details about the film can be found on the website www.screamparkmovie.com.

Her favorite mediums are oil, graphite and gold leaf. When painting, she works primarily in oil paint due to the vibrancy of the color and the permanence of the paint. She believes that what she says with her art is as important as how she says it. Research, color psychology, and composition all play a critical role in every image that she creates. Rhonda is a member of the Pittsburgh Society of Illustrators and is the current chairperson for their Scholarships Committee. Her work has been exhibited in several museums throughout the world. In 2005 her artwork done for Starship Troopers won an Origins award for Best Science Fiction Art.