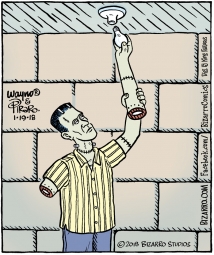 Wayno® is an illustrator, cartoonist, writer, and musician. His illustrations have appeared in The New Yorker, The New York Times, Entertainment Weekly, Nickelodeon Magazine, and many others. A prolific gag writer for Dan Piraro's Bizarro and Hilary Price's Rhymes With Orange, he launched his own comic panel, WaynoVision, in 2014