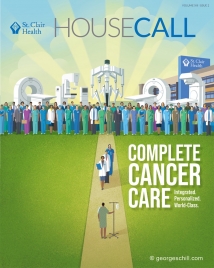 George Schill's illustration career began many years ago while attending St. Colman Elementary School where he sold "Weirdos " to classmates for a nickel.His thriving business was short-lived, however, as Sr. Mary Anthony called his mother and expressed concern that her dutiful son was spending much of his free time drawing the devil. These days, George still earns his lunch money by drawing weirdos and other stuff for a wide variety of satisfied clients. Along the way, his work has garnered a number of awards, and has been selected for inclusion in the NY Society of Illustrators Annuals, Communication Arts, Print's Regional Design Annuals, and the Addy's. His greeting cards have also been nominated for the National Cartoonist Society's Reuben Awards. His concepting ability and wide range of fresh and consistent styles are suitable for any market.

In 1997, George co-founded the Pittsburgh Society of Illustrators and acted as its first vice-president.

In addition to his freelance work, George has designed thousands of greeting cards entering his 35th year as a full contract artist and writer with the humor divisions at American Greetings. He works out of his home in Monroeville, Pa . During his free time, he draws vacations.