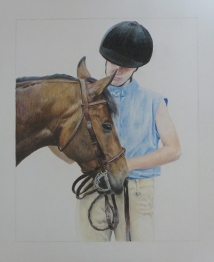 Helen has been creating art since she could first hold a crayon or pencil, on everything from napkins in restaurants to the margins of her college biology notebooks. Her first publicly-displayed artwork was created during high school, when she designed a series of cartoon characters in digital media for an online magazine. Shortly after, she began doing detailed portraits of pets, some of them for commission, working in Prismacolor colored pencils. Later in high school and the first years of college, she collaborated with a naturalist on a project describing the endangered bird species of Pennsylvania, for which she did the illustrations: a series of scientific watercolor paintings of the various birds.

Attending college from 2016 to 2020, she studied English literature as a major and studio art as a minor, when she had the opportunity to work in graphite pencil, pen and ink, watercolor, acrylics, and oils. She now passionately enjoys the slightly impressionistic, vivid media of paints, although she still works in pencil as well. She graduated in July of 2020 and is now accepting commissions for illustration work, particularly book and magazine illustration or portraiture. Her favorite subjects are people and animals; she enjoys capturing their individuality, which she feels is like building a particular friendship with each subject that she draws.