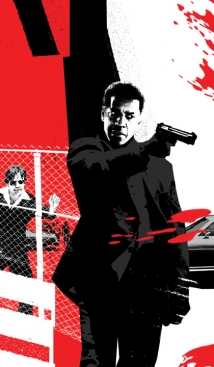 John Ritter is an American Post Pop artist whose vibrant depictions of celebrities and popular culture have consistently defined the pages of The New Yorker, Time, GQ, The New York Times and Harper‘s.

Ritter began his career in Northern California in the early-1990’s, where his unique style and deployment of color landed him a slot on the design team that created and marketed Adobe Photoshop. Since then, Ritter has seen his uncompromising interpretations of film, writers, musicians and politicians work their way into the collective American psyche.

Never relegating himself to a single format, his work is seen not only in numerous national and international publications, but also in Broadway advertising campaigns, corporate art installations, product packaging, and gallery exhibitions (NYC, San Francisco, and Pittsburgh). His art graces the collections of Academy Award-nominated composer Lalo Schifrin, financier Lenny Dykstra, producer David Lonner, Las Vegas Casino mogul Darin Feinstein, as well as collectors throughout the U.S. and Europe.

Ritter has consistently won awards from prominent entities such as American Illustration, Communication Arts, The New York Society of Illustrators, and Gawker. He lives and works in the wooded hills of Pennsylvania.