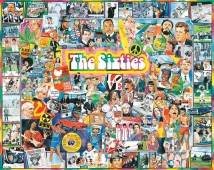 For most Pittsburghers, the Immaculate Reception is the biggest scene in sports history. For James Mellett, it’s about the size of a postage stamp.

Jim, born and raised in the ‘Burgh, has shrunk thousands of cultural icons into White Mountain montage puzzles working as a freelance illustrator.

He’s also designed Pittsburgh Penguins tickets; drawn a head of lettuce for bags of salad; exhibited work at the Heinz History Center; and won sports art awards from Beckett Magazine, among other adventures.

His BFA from IUP and an Associate’s Degree from the Art Institute of Pittsburgh led him to be a founding member of the Pittsburgh Society of Illustrators, where he’s slaved as its secretary for over a decade.

Jim and his wife, Jan, have a daughter, Kathryn.